Taken from Jon Gordon’s Blog.
How to Overcome Negative Thoughts and Fear
“Do you struggle with Fear?”
Every hand in the audience went up when I asked the question.
“Do your negative thoughts come from you?”
Most said “Yes.”
“Are you sure,” I asked? “Who would ever choose to have a negative thought?” Eyes widened, some heads shook and a few people smiled. They were having an Aha moment.
I then explained that your negative thoughts don’t come from you. They come from consciousness. They pop in at random times or, for some, more frequently. They are like an unwanted surprise guest that show up at your front door to tell you how weak, unworthy, insignificant and incapable you are.
But here’s the deal. Like any unwanted surprise guest you decide whether or not to entertain them. A thought’s power only comes from the power you give it. You don’t have to give your negative thoughts power. You can ignore them. You can see them for what they truly are: lies, lies, lies.
Always remember that just because you have a negative thought doesn’t mean you have to believe it.
Fear is a liar and if you struggle with fear and negative thoughts, it’s because you believe the lies that they tell. Fear stands for False Evidence Appearing Real. Fear looks and feels true but it isn’t.
Fear says you aren’t strong enough, good enough, successful enough, wealthy enough, happy enough, smart enough, talented enough. Well, I say enough with fear. Instead, know the truth. You have everything you need inside you to be successful. You weren’t meant to be average. You have a desire to be great because you were created and born to go great things. You have a purpose. There’s a plan for your life. You may be going through a hard time now but the best is yet to come.
When fear and negativity pop in your head you can ignore them or speak truth to the lies. That’s what I do and I was thrilled to hear that’s what the singer Jewel does as well. I was recently listening to an interview she did on The Finding Mastery Podcast and she said she makes a list of all the lies fear tells. Then she writes down the truth next to the lies. She said it has given her a lot of power and freedom.
It can do the same for you. There is a tremendous amount of freedom in knowing that negative thoughts are not coming from you. There’s a ton of power in knowing that you don’t have to believe the lies. You can know and live the truth and just keep moving forward with belief, optimism, faith and grit.
During the Australian Open Championship a few weeks ago, Roger Federer lost the first few games of the 5th and deciding set to Rafael Nadal. Federer said that at the time he thought “It’s probably not going to happen for me tonight.” A thought popped in and then it popped out. He didn’t energize it. He just kept playing one point after another and eventually won the set and the match.
You can do the same. No matter what thoughts come your way, you have everything you need to accomplish your task. Thoughts will come and go but you just stay in the game and keep moving forward. The truth is that the best is yet to come. Do you believe it?
- Jon
at September 28, 2020

It is about education.  Whether you believe that one should wear a mask or not is not the question.  As we continue to get guidance from our... 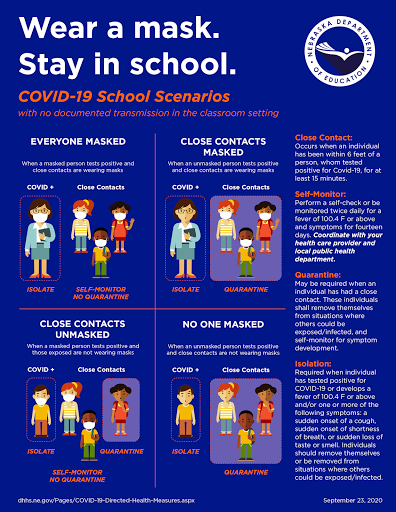